Many of our cruiser friends look for ways to help out local communities that they visit. One effort comes from a Rotary Club chapter in La Paz that counts a few sailors as members.

Julie went along to make a delivery with the club on 12/16, and took a few photos of course. Thanks to our friend and Club Rotary Bahia de La Paz member Charles from S/V Shadowfax who helps explain the details:.

Generous cruisers and townspeople play Santa to kids from the Soledad Albergue, a rural boarding school located in southeastern Baja roughly behind the fishing village of San Evaristo. La Soledad is about a three hour drive from La Paz, about 1/3 (~75 KM) on paved roads and 2/3 (~64 KM) on a blend of rough gravel and soft sand.

Kids aged 5 – 14 from widely spread rural families (ranchos and fishing villages) attend the school.  It’s too far to go home at night for most of the children, so they live in dormitories.  Money is in short supply in these areas, as sometimes kids will mention in their letters to Santa.  Often we are the only source of Christmas presents.

The kids write letters to Santa, distributed by the club. Donors buy presents, wrap them and return them to the Club.  About 30 gifts were provided from the La Paz  cruising community. The Club delivers them to the kids during their Christmas program before they leave for the holidays.

For the three years that we have participated, we have found the requests to be pretty modest, usually the wish list includes a pair of sneakers and perhaps an item of practical (dress pants, sweatshirt, etc.) clothing. We usually add in a few other generic items that we figure will either be useful, fun, or able to be shared with others.

Our friend Charles usually appears as Santa to help hand out the gifts, but as he had to travel to the U.S. because his mother was in the hospital, his wonderful wife Carol filled in as Mrs. Claus.

La Soledad is pretty self-contained. There is a fresh water source nearby which is pumped to storage tanks. The international Rotary (as well as the local chapter) is involved in an initiative to bring inexpensive water purification devices to remote areas, and the school may be a beneficiary of this program soon.

Solar power provides electricity (nice big Xantrex inverter in the principal’s “apartment”), They do have a satellite internet connection to receive some tele-education. (Nearest cell tower is probably 75 miles as the crow flies.) Some of their fresh food comes from the nearby ranchos and fishing villages – so the kids eat well – no source of junk food for miles and miles! (Menu below for my foodie friends.) 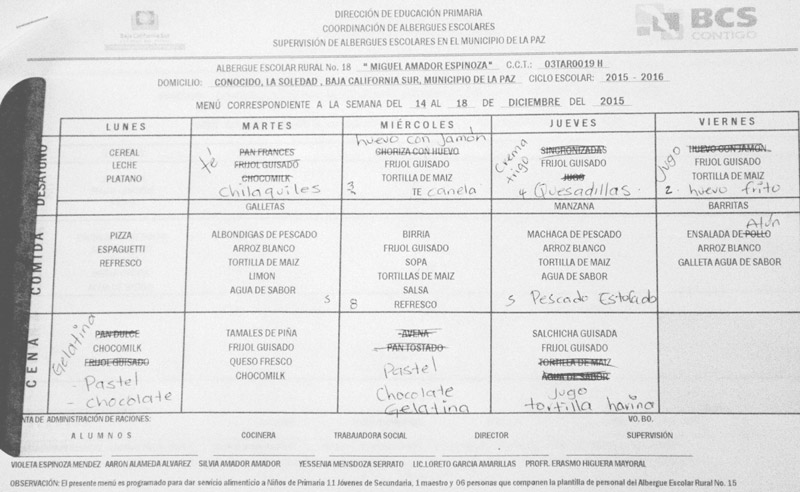